You’re staring at a blank screen with a blinking cursor, sitting in front of a piano that’s out of tune, holding a paintbrush before an empty canvas.

But… where to start?

The options are endless. You could start by writing any word, learning any song, or using any color.

Perhaps you can relate to what Dr. Seuss once penned… 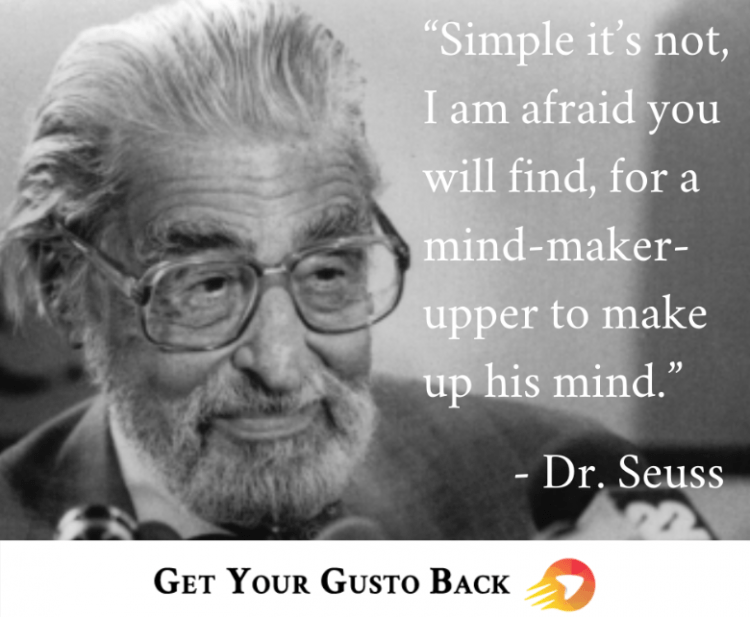 Still, the desire to create something awesome — to build something with your own hands — is a human desire.

You were created, after all. The natural progression of things is that you, yourself, create.

Maybe you want to build a business, raise a family, or become a world-class pianist — each of those is an expression of your creative instinct.

But why is the creative process so fucking difficult? Why is it hard to start that book and keep working on it for months or even years? Why is it so difficult to write a blog post, put paint on a canvas, or build a business?

Why is it so difficult to create something you really want to create?

I mean… in and of themselves, those are just things you can do — the how-to is technically no more demanding than loading up a video game, reading a good book, or going for a stroll through a beautiful park on a sunny day.

The expression of your childlike desire to build and create shouldn’t be agonizing, it should be fun and exciting (just like it was when you were a toddler).

Browsing through Facebook notifications, I stumbled upon a particularly thought-provoking response to this article I wrote from a woman who is struggling to get her gusto back…

“I’m being pulled in so many different directions. That’s because I allow it. I chase after more than one career, but I struggle to even take the smallest step towards achieving any improvement in any of it. My days feel busy and filled with too many to-dos, but the truth is that I’m not really doing anything. I’m just distracting myself, keeping my mind busy so that I can’t concentrate on what really matters.”

I wrote back to her asking for more details and she further explained that she wants to be a writer — desperately, that’s what she wants! — but she keeps putting energy into other things she perceives as being easier — like taking her resume to the local supermarket.

She’s pulling herself in different directions and because of that, she’s making little progress in every direction.

It’s the difference between spreading your creative energy out over 10 activities and focusing on just one big thing.

The former creates frustration and dissatisfaction while the latter allows for real progress and fulfillment. 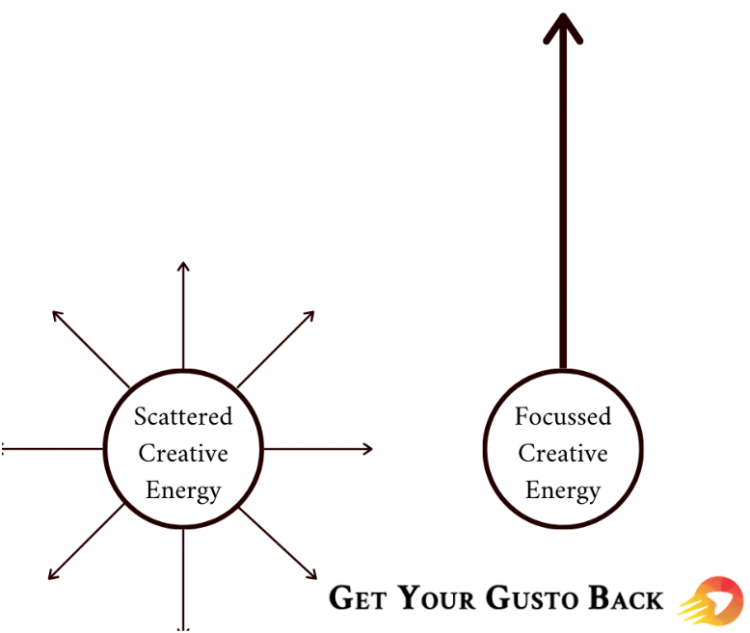 You make a lot more progress when you focus on one thing rather than 10 things.

But scattered creative energy is a common human experience in the 21st century. If you’re in a first-world country and make a living wage, you can do pretty much anything you want. But because of a psychological principle called “analysis paralysis”, most of us struggle to make a real long-term decision about what we want — we fleet from passion to passion, never making much progress on any single ambition. It’s frustrating and dissatisfying.

Why, you ask, is it so hard for us to focus in on one thing that excites us?

There are different reasons for different people…

But let’s take it one step further: why are you afraid of missing out on other opportunities? Why do you have a lack of long-term confidence in yourself? Why do you try to do everything rather than commit to one thing?

I believe there’s one underlying reason that explains all of that — one large and in-charge cause for your seeming inability to make real, meaningful progress on your passions.

And it all has to do with judging… rather than creating. 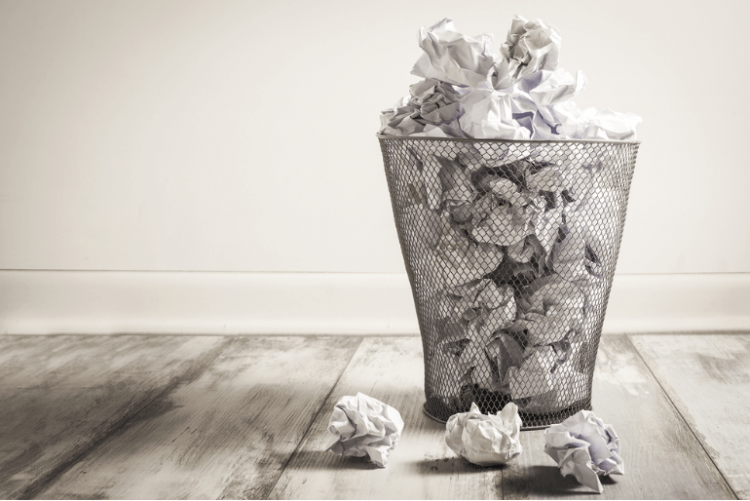 I came to understand the powerful difference between judging and creating on top of a snowy mountain.

I’d convinced a friend of mine to go snowboarding for the first time (if you’re a snowboarder, then you know how painful of a process this can be). He fell a few moments after standing up, which is to be expected. Then he fell again. And again. And again… and again.

Still — to be expected.

But not to him. On one particular fall, he yelled, “Damn it! Stop fucking falling!” and punched the ground as hard as he could. His face and hands were shaking from anger.

It became clear that he wasn’t in his flow, he wasn’t working to learn and create — regardless of the pain involved in that process — he was judging himself and the world based on un-backed expectations for how he should be performing.

And because of that, he quickly became discouraged. After just one run, he sat at the bar the remainder of the day while the rest of our group enjoyed the chill of the slopes.

You see, it’s never really the pain of creation that stops you in your tracks. It’s not the snow raking your face, the hard falls or the aching muscles that keep you from moving forward. The pain is like wind, it’s a natural part of momentum, it’s something to accept, learn from, and overcome, it’s the challenge that life gives us so we have something to do.

No — the pain isn’t the problem. It’s our expectation that the pain shouldn’t be there, that we’re doing something wrong if pain is involved, or quite simply, a belief that we’re not good enough (i.e. judgement) that keeps us from fulfilling our full potential.

Have you ever heard the advice that wannabe writers should write the first draft of their book without looking back — without making edits, re-reading, or engaging negative thoughts?

It’s because you can’t create something and judge it at the same time, not if you want to make any real progress.

And that truth applies to every type of creative expression.

Don’t get me wrong — there’s a time for carefully calculated self-reflection. But that is very different then harsh self judgement.

The Difference Between Self Reflection And Self Judgement

Ughhh. Is this even going to get published?

Sitting at my desk as tall as I could muster, my fingers flitted from key to key in an attempt to tell a story I’d spent the last 6 months outlining.

But the thoughts wouldn’t stop.

Who is actually going to read this? What do I expect is going to come of all this hard work?

Unfortunately, there was no all-knowing god whispering back, It’ll be all right, Mike. You’re going to crush it. You’re awesome.

Nope. Crickets. And, of course, my own judgmental response…

No one is going to read this. This will never get published. Nothing is going to come from all this hard work.

I quit writing after just a few weeks. And I still haven’t picked that book back up.

That is the result of judging your progress while you create something.

It’s not helpful. Those thoughts create nothing but feelings of inadequacy and frustration. And those are exactly the kinds of thoughts I’m talking about when I say “self judgement.”

But there’s an important distinction here — namely, that self reflection is different from self judgement.

After all, you must be allowed to think something while you’re creating — you can’t possibly just disengage all thoughts and mindlessly charge forward.

That’s where self reflection comes in.

You see, there’s a big difference between asking yourself, Will this book ever get published? (judgement) and, How can I make this book worthy of being published? (reflection).

The first takes away your control and allows for only one negative response while the second empowers you to make real progress.

It’s the difference between adult-like judgement and childlike curiosity. One disempowers while the other encourages action.

Consider the difference between these thoughts…

Of course, ignoring your judgmental impulses and engaging your childlike creativity is easier said than done.

So let me show you some practical strategies.

A few months ago, I typed the last word for the first draft of a book I titled, Get Your Gusto Back: How To Reignite Your Inner Fire and Create a Life That Excites You.

It’s the first book I’ve completed (I’ve started probably 30 different books over the last decade). And there’s only one reason that I actually finished this first draft, but never finished the others.

You see, I made a rule for myself before I started: I would not engage a single negative thought while working on the book.

When a negative thought would rear its ugly head, I would simply say, “No, thank you. I’m busy right now,” and continue with the creative process.

It wasn’t always easy, but I was stubborn. And after enough refusals to engage with negative self-talk, a few remarkable things took place.

First, fewer negative thoughts tried to disrupt my time working on my book. The less that I entertained them, the more bored they became with trying to interrupt me.

And second, my childlike creativity took over. Without constant judgmental thoughts killing my groove, my intuitive curiosity and excitement for creating was finally allowed to run free.

When you give your creative flow time to manifest without engaging negative and judgmental thoughts, you’ll create incredible things beyond your imagination. In the words of Thomas Edison… 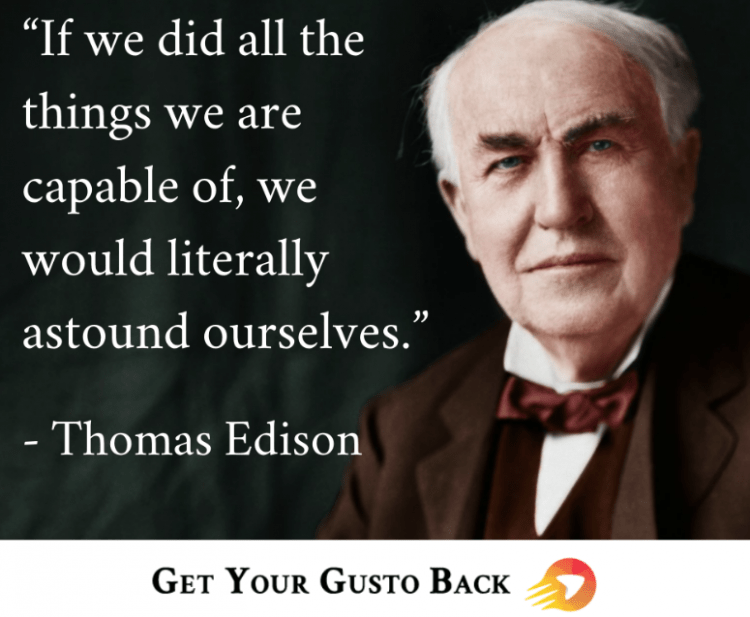 Here are some more practical tips for quieting your negative thoughts so you have the mental space necessary to astound yourself.

Now Is The Time For Creation

Want to write that book? Want to build that business? Want to learn that skill, meet that person, or make more money? Don’t think too much about it. Do like a little kid would do: just get started.

And if you’re still not convinced, check out this stream of tweets that J.K. Rowling posted a few years ago, which make a compelling case for engaging your creative process without judgement.

— J.K. Rowling (@jk_rowling) April 3, 2017
Even if it isn’t the piece of work that finds an audience, it will teach you things you could have learned no other way.

— J.K. Rowling (@jk_rowling) April 3, 2017
The discipline involved in finishing a piece of creative work is something on which you can truly pride yourself.

— J.K. Rowling (@jk_rowling) April 3, 2017
… you’ll know you can do it again. That is an extraordinarily empowering piece of knowledge. So do not ever quit out of fear of rejection.

— J.K. Rowling (@jk_rowling) April 3, 2017
Maybe your third, fourth, fiftieth song/novel/painting will be the one that ‘makes it’, that wins the plaudits…

— J.K. Rowling (@jk_rowling) April 3, 2017
… but you’d never have got there without finishing the others (all of which will now be of more interest to your audience.)

You can never get where you want to go if you never take the first step.

Let go of your judgement. Engage your creative process — whatever that looks like! — and get started today.

Set time aside to dream, plan, and create without judging what you’re creating.

Soon, you’re going to blow us all away. 🙂

Mike is a writer for SUCCESS, AdWeek, and Addicted2Success. He’s been quoted on Forbes and Entrepreneur for his expertise in marketing and personal development. He’s also the owner of Get Your Gusto Back where he helps people reignite their inner fire.