Why Do People Believe in God? This Story Explains Everything.
Skip to content

Why do people believe in god when there is no evidence for his existence?

Why do people create evidence for god’s existence to justify their beliefs?

And why is it so damn difficult to leave religion?

This is my story of abandoning religion — from pastor to atheist — which I think provides some answers to those questions, and some hope for those who are trying to do the same.

How I Became Addicted To God

4th grade was the first time I realized that I was going to die.

My friend’s father had passed away unexpectedly.

Despite my parent’s gentle guidance and midnight reminders that they weren’t about to “die anytime soon,” I didn’t get much sleep for the next few months.

It’s all I could think about.

Over time, though, the fear faded, or perhaps, I learned to distract myself.

But it was always in the back of my mind.

It wasn’t until 7th grade, when, at church, I learned the concepts of heaven and hell, that I thought I might have discovered a solution.

If the afterlife is real, I thought to myself, then death doesn’t matter — all that matters is following god as best I can so that I and everyone I love will go to heaven.

I started Googling for “proof that god exists” and “proof that Jesus died for our sins” — Google phrases that receive thousands of searches every single month.

I became obsessed with wanting to find some sort of guarantee of the afterlife.

And I found quite a few articles trying to give it to me — some told the story of a watchmaker, others used scripture as evidence, and still others pulled from archeological discoveries that somehow “proved” a piece of The Bible.

But I still wasn’t satisfied.

So I went to my Dad who I thought must have the answer, and I asked him: “Is there proof of god?”

The next 10 years of my life had a lot of twists and turns, but one theme stood tall — a burning desire to make sense of heaven, hell, and god.

It was my obsession.

I started a bible study group at my public high-school.

I wrote a book about theology for my senior project.

I went to a Christian college.

I proposed to my wife after dating for three months because she wanted to be a pastor’s wife.

And I even became the co-pastor of a small “startup church”, read hundreds of books about religion, led countless community service projects, and gave more than a hundred sermons between the ages of 19 and 24.

My mantra became, “If this stuff in the Bible is true, then there IS no middle-ground.”

I couldn’t half-believe… I had to do everything in my power to prove to god that I deserved to get into heaven, and that those I love also deserved it.

And the truth is, my belief wasn’t a choice.

I HAD to believe.

If I didn’t believe, then death was real, life was temporary, and everyone I loved was going to die.

Looking back, the simple truth is that I didn’t have the fortitude to accept those sorts of truths.

I couldn’t do it.

I wouldn’t do it.

So I played pretend.

Like an addict lost in the high, I refused to consider that there might not be a god.

Until, that is, tragedy forced my hand.

It was noon on a Monday when my cell rang.

“Hey — have you heard about Travis? He’s missing.”

The previous night, my good friend, Travis, had driven off a 100-foot cliff.

We found the car on Monday, but we didn’t find the body until Friday.

I remember that night, I turned to Micaila as she tried to comfort me, as she tried to tell me that Travis was in a better place, and I just said, “No. I think he’s just… dead.”

When confronted with my friend’s death, something clicked.

For a few more weeks, I tried to convince myself that I was wrong.

And once I knew, I couldn’t un-know.

The simple truth was before me, at face value, and to deny it would have been to reject a fact.

His body had died, and every shred of scientific evidence indicated that Travis, as I knew him, was also dead.

There is no evidence for the human soul.

There is no evidence for heaven and hell.

There is no evidence for the validity of any of religion’s claims about god and the afterlife.

There is hearsay, there is personal experience, and there is marketing with thousands of Christendom’s dollars backing it.

But there is no real evidence.

So I finally accepted that I’d never see my friend again. He was dead. One day, I’m going to die, too.

And thus began my journey of accepting the beauty and hope of a temporary life.

My Road To Recovery

It took me 6 months to admit my lack of faith and leave religion.

This was mostly logistical.

I’d been the co-pastor of a Church for four years and I had no idea how to break from those relationships — I knew that when I did, I’d lose friendships… I’d become just another “lost soul” who “lost the faith.”

So I took time to figure out what I was going to do when I did leave — where I was going to work and what relationships I’d still be able to rely on.

Then, finally, I left.

And it was the best thing I ever did.

I realized the freedom and joy of being the decider of my own fate.

I realized that I’m totally capable of creating my own morals.

I realized that I’m a blank slate with no divine expectations or requirements — at last, I could be who I wanted to be without guilt or second thoughts.

I could finally become my best self without caring about whether god or the church approved.

But not everyone is so lucky.

Why Reasonable People Believe in God

I always had doubts.

The truth is that I was never totally able to shake my Father’s words about having faith even when there’s a clear lack of facts.

But our world doesn’t.

Innocent children die from mindless diseases, disaster strikes whenever it pleases, and despite scientific efforts to find the “soul” of a person, the same answer keeps staring us dead in the face: dead is dead. 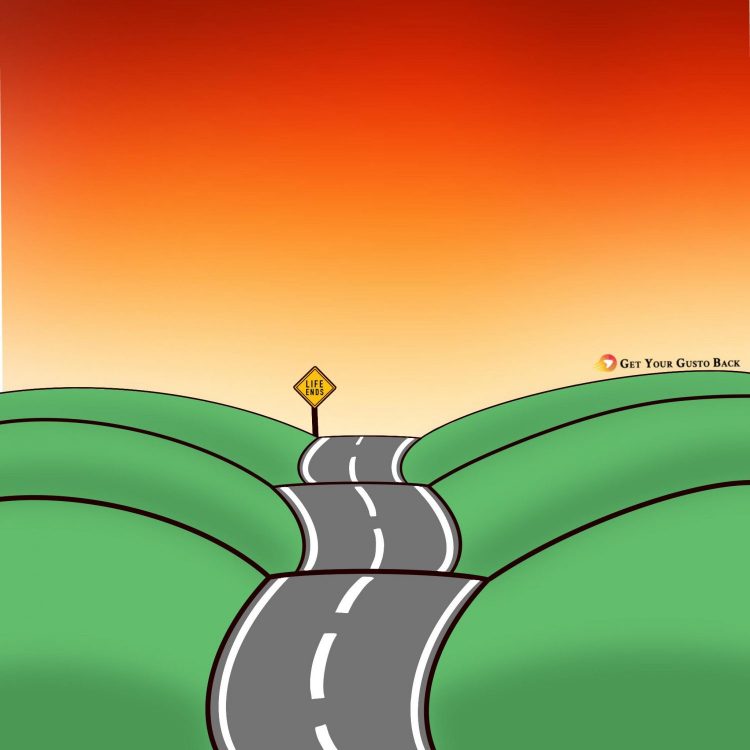 And that illustrates an important point.

And in that capacity, it’s not such a bad thing.

If it helps people become the best that they can be, then why not continue believing, regardless of scientific evidence?

For some people, I don’t have an answer… it simply is better for them to believe in a god who doesn’t exist because of the hope it provides.

In the same way that people take meds to manage their anxiety, some people might embrace god as a comforting illusion.

That’s why it was so difficult for me to leave and it’s why so few people ever even consider leaving.

But, to close, let me explain why you don’t need to depend on god…

… and why a temporary life is more meaningful than a permanent one.

Why Life is More Meaningful When it’s Temporary

All things that matter are temporary.

Laughter with friends, the birth of a child, a great work of art… it’s meaningful BECAUSE it’s temporary.

Doctors who watch childbirth every day are no longer amazed by the sight, janitors who clean the world’s most beautiful buildings are no longer stricken by their magnitude, and even prolific artists burn-out of doing things they love.

That’s because the temporary is more beautiful than permanent.

You gasp at the Grand Canyon because you’ve only seen it once before. You laugh at a comedian’s joke because it’s the first time you’ve heard it. 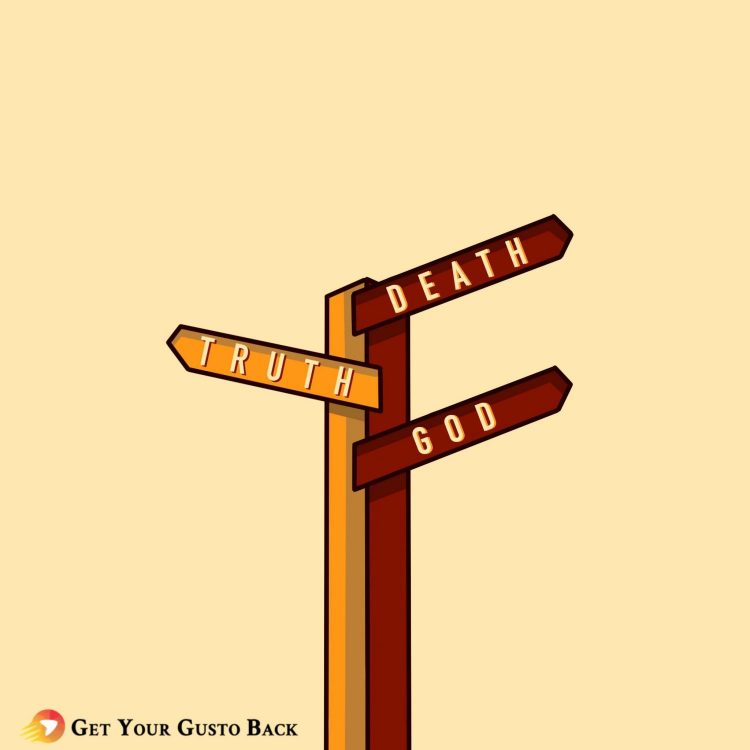 You see, death is a gift.

Death is what makes life beautiful.

Death is what makes YOUR life meaningful.

And death can be what drives you to make an impact while you still have time.

What we fail to realize, though, is that we have been “god” all along.

The answered prayers, the moments of inspiration, the self-love, the feelings of wonder and hope… those have all been you, not god.

And you are a fitting replacement.

Believe that you can build an exciting life and make an extraordinary impact.

Believe that you can spread love and create remarkable pieces of art.

Believe that you can build any business, pursue any dream, and accomplish any goal.

Because in the end, god might not exist, but you do.

Mike is the founder of Get Your Gusto Back. He has a passion for traveling, he LOVES to write, and he’s been mentioned in Forbes and Entrepreneur for his expertise as a marketer and personal-development expert. He currently lives in Hawaii with his wife and two-year-old daughter.

11 thoughts on “Why Do People Believe in God? This Story Explains Everything.”