“I Don’t Know What to Do With My Life”: An Open Letter To Lost People
Skip to content

Don’t know what to do with your life?

You probably feel confused, lost, and insecure… maybe you feel like your life doesn’t have meaning.

It feels like you’re supposed to have an exciting, thrilling, and meaningful destiny.

But that destiny seems hidden.

Well, it’s not just you… and it’s not your fault.

Why You Don’t Know What To Do With Your Life

Imagine that you were born 5,000 years ago, during the stone age.

You would have grown up in a small tribe of about 25 people, living your life in the forest, sleeping in a hut made of wood, stone, mud, and sand, spending your time hunting and gathering.

You would have been physiologically the same as humans today (for the most part), but you would’ve lived in a very different environment.

You wouldn’t have been sending out resumes or seeking a lucrative career.

You wouldn’t have been trying to build a million-dollar business.

You wouldn’t have been desperately trying to find your purpose.

You would have been trying to fucking survive — because lions and tigers and bears, oh my.

In fact, your primary concerns would’ve been finding food for your next meal, seeking shelter, crafting weapons to defend against attack, and working to keep a good reputation among your tribe.

Compare that to your life today.

And those are just some daily concerns.

You also wonder what your purpose is.

(No wonder mental illness is on the rise!)

So here’s my question: between now and 5,000 years ago… what changed?

It’s not us that changed… it’s our environment.

We no longer live in the forest, sleep in a hut, and only worry about our survival… because our survival is taken care of.

Still, our minds have evolved to solve problems.

And in the absence of real life-threatening concerns, our minds automatically search for other problems to solve.

In fact, Maslow’s Hierarchy of Needs supports this notion. 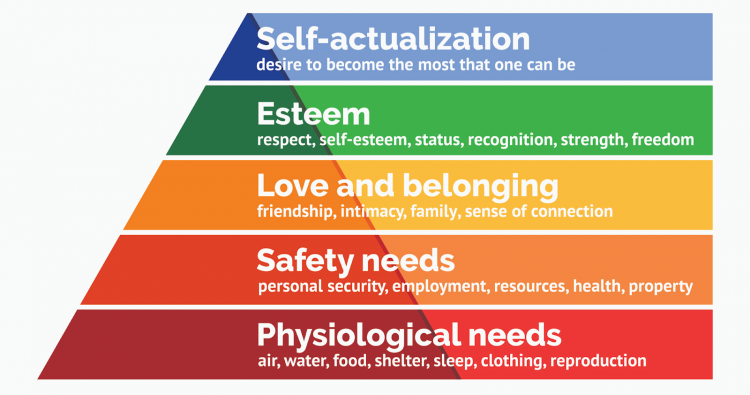 From bottom to top, each piece of the hierarchy can’t be fulfilled until all the needs below it are satisfied.

Stone age cavemen were worried about survival, so the highest they probably ever reached on this hierarchy was “love and belonging”, but only when their other basic needs were satisfied.

Today, the default for most of us is that all of our needs are met until we get to “Esteem” and “Self Actualization”.

This is why we spend so much time thinking about what our purpose is in life.

But it’s also a two-edged sword.

Because most of us get stuck.

According to Gallup, 70% of people in the U.S. are unhappy with where they work. And 900 million people world-wide feel unfulfilled with their life.

There’s two things I want you to take away from this.

First, you’re not the only person who’s struggling to find meaning. Lots of people are struggling just like you.

But perhaps more importantly, your search for meaning is justified — it’s a natural part of being human and you should certainly pursue it.

Unfortunately, most of us try to find our purpose.

And that’s where our troubles begin.

Fate is Fiction, Meaning is Malleable

I spent four years as the co-pastor of a small church.

During that time, I encouraged people to live pure lives. I guided people through difficult times. I preached 50 sermons about god, purpose, meaning, and destiny.

And then, I left…

I abandoned religion. I abandoned my belief in a higher power. I left my church with no plan to return.

(You can read the full story over here)

And it was the best thing I ever did.

In retrospect, I discovered that seeking my purpose through religion and believing that I had some preordained destiny had caused immense stress, anxiety, and depression in my life.

After all… if I have to figure out what my purpose is, then I’m going to worry about it a lot. And when I’ve found it, I’m going to question whether I’ve found the right thing.

And when I’ve changed direction, then I’m going to question that decision as well.

The best thing I could do for myself was accept that I don’t have a purpose.

And neither do you.

Let me show you what I mean.

It’s estimated that 107 billion people have ever lived throughout the history of our earth… and they’re all dead. We only remember a few of their names.

There are about 100 billion galaxies in our universe. And there are estimated to be about 1 billion other earth-like planets just in our galaxy — meaning planets that could potentially have life.

In the words of Joe Rogan…

“We are talking monkeys on an organic spaceship flying through the universe.”

Maybe even that is a generous description of our collective significance.

Truthfully, you and I are insignificant.

But that’s amazing in its own way, because we are a small part of this amazing universe.

And we are alive, capable of observing its beauty and chaos.

While we’re here, there is only one question that the universe poses.

The only question we have to answer is what we’re “going to do with the time that is given to us” (credit: Gandalf).

Because while we might be cosmically insignificant, having a purpose provides us with a much needed sense of significance.

And in the end, impact is still impact, no matter how small.

How To Decide What To Do With Your Life… For Now

Creating a purpose for your life is actually pretty simple.

The first thing you have to do is realize that your decision need not be permanent.

You will be alive for about 80 years, and while more time invested means greater impact, your life is long enough to support a few different pursuits.

Next, you’re going to answer one question that’s going to drive everything else.

But it’s the only question that matters…

What do you really want?

To answer this question, you need to understand a few simple truths.

Here’s how I would answer the above question:

I want to financially support my wife and daughter. I want the three of us to have a wonderful and exciting life together. I don’t want to worry about money. I want to have a measurable impact on the people around me. I want to inspire others. I want to be a great father and husband.

That’s what really matters to me.

So what really matters to you?

Typically, this boils down to just three overarching themes…

Either way, knowing what you really want out of life is the first step toward getting what you want.

But we have a little bit more work to do.

Because while you know what you want, we haven’t yet turned those desires into something practical that you can pursue.

So now it’s time to brainstorm.

Keeping in mind what you really want out of life, write down some ideas for pursuits that would fulfill those desires.

What you write down all depends on what you ultimately want out of life.

Remember: you can do anything.

And so long as that thing checks the boxes of what you really want out of life, then the rest doesn’t really matter.

Choose something on your list that seems attainable and then go for it.

And if you still feel stuck, don’t worry.

I outlined, in detail, my 30-day process for creating an action plan that will drive you toward effortless success (or, at least, as close to “effortless” as possible!).

Go here to get it.

The Point Isn’t To Know Your Purpose, But To Create a Purpose…

You have no preordained destiny.

That might feel discouraging, but that simple truth means that you can craft your own destiny. You can do whatever you like with your life.

That’s all that matters.

And you can follow the above process to create your own story.

We’re looking forward to seeing what you do.

Mike is the founder of Get Your Gusto Back. He has a passion for traveling, he LOVES to write, and he’s been mentioned in Forbes and Entrepreneur for his expertise as a marketer and personal-development expert. He currently lives in Hawaii with his wife and two-year-old daughter.