I thought my wife was going to kill me, as all men do — I’d never seen her that angry before. Still, even though I was within punching range, I was mostly worried about her and the pain causing her to shout again and again, “I can’t do it! I can’t do it!” with tears spilling from her eyes.

“Okay. I’ll be right back.” I ran out the door, stealing one more glance at my carefully breathing wife, and rushed to the nurse’s desk. “Is the anaesthesiologist almost here? She really needs him” I said, even though I’d asked the same question just 5 minutes ago.

I nodded and rushed back into the room where my wife was trying to “breath through her pain” – if that’s even possible.

10 hours later represents the happiest moment of my life. I’d never felt that way before, so emotionally overwhelmed and so exhilarated.

But you know what I’m talking about. You had the same experience when your child was born — you felt invigorated and fulfilled, like nothing more needed to be done for you to be happy. In that moment — although short-lived — you were complete, you required nothing.

In that moment, your newborn child unknowingly gave you a gift: untainted joy.

And your child continues to provide you with that gift sporadically. Because of them, you laugh harder and more often, you show more affection, you strive to be better, and you know cuteness like you’ve never known cuteness before.

Don’t get me wrong: there are plenty of dirty diapers, sleepless nights, tantrums, and spit-ups to make even the Pope cringe.

But still,  those untainted bundles of joy have a lot to teach you and me about getting our gusto back for life — about reclaiming your childhood passion and digging to the root of what it means to be human, of what it means to feel your inner fire again.

On that note, here are 5 lessons I’ve learned from my own ranting, romping, rollicking two-year old princess.

As I write this, Andie is sitting on the floor in nothing but her skivvies, diligently working to mark every page of her coloring book. 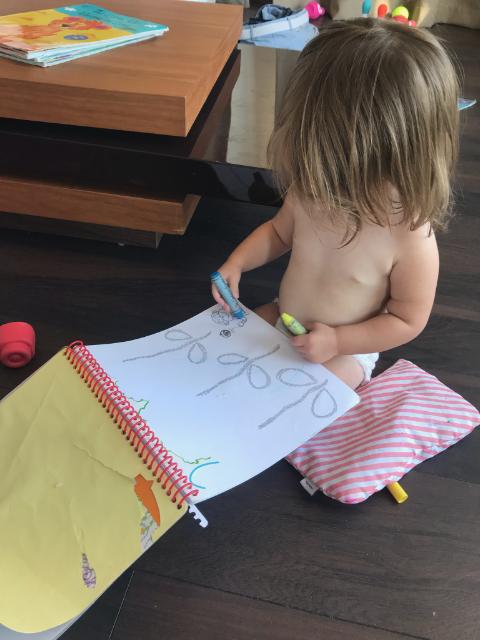 I have no fucking idea. But if this morning is anything like every other morning, she’ll soon steal the car keys off the counter when I’m not paying attention and try to stuff them into any hole wider than 2 mm. After that, she’ll toss my expensive sun glasses against the window to see what happens. Then she’ll probably try to ditch her diaper when Mama isn’t watching and run around the room singing “Whaaa! Whaaa! Whaaa!” as loud as she can.

But she does all of that because she’s trying to learn about the world around her.

And she doesn’t do it halfheartedly. When she’s working on something (like marking every page in her coloring book), it takes all of her attention and if someone stops her in the middle, she gets upset…

Because she loves learning. She gets lost in the process. She’s not thinking much about the destination. She’s just enjoying the moment.

(Now she is digging through the kitchen and just found the oven mitt and whisk. Send help.)

And I’ve found that I can experience a similar joy in learning when I let go of my inhibitions — of my preconceived judgements — and just enjoy the process, like a little child with infinite curiosity.

It’s easy to pretend like life is super serious…

I’m really important… My situation is really hard… I’m a big deal, but people just don’t know it yet…

The reality is (in Joe Rogans words)…

“We are talking monkeys on an organic spaceship flying through the universe.”

How is that to make you stop taking yourself so seriously?

After all, children don’t. Sure, they get upset about seemingly silly stuff — losing their toy or sitting in the car seat, for example — but they also snap back into a playful mood just as quickly.

They don’t hold a grudge, they don’t keep thinking about how life is unfair and they’ll never be successful. They don’t overwhelm themselves with the injustices in the world and the tragedy of it all. And they don’t let external events impact them for longer than a few minutes (usually).

They seem to know something that most of us forget: the world is just a big fucking playground and there’s never a bad time to have fun, even if you were crying like a banshee five minutes ago.

3. Falling down is no reason to quit (but it might be a reason to cry).

In self-development circles, there are two basic schools of thought about overcoming fears, failures, and adversity.

One side tells you to “buck up, buttercup” and stop being a little bitch. Your feelings don’t matter. Do what needs to be done and move on with your life.

The other school of thought tells you to embrace your emotions and to feel them deeply… that emotions are the window to your soul and you must keep them in balance. If you aren’t constantly in tune with your emotions, then you aren’t really living. And if you do anything which makes you uncomfortable, you should probably just do something else.

I think we need a third option.

And we find that third option when a child smacks their head into the pavement (this happens way more often than I thought was possible).

Yes. Andie cries. And she asks for a hug from me or Micaila. We give it to her, we sooth her, and within five minutes TOPS, she’s ready to walk again with the same enthusiasm she had before she fell.

She doesn’t entertain musings about how maybe she’s just not a good walker and maybe she’d be better off in a wheelchair for the rest of her life, endlessly pushed around by Momma and Dadda (please god no). She doesn’t keep feeling the giant bruise on her head to remind herself that she made a mistake and by-god, it could happen again!

When she falls, she cries, acknowledges the pain, and seeks out comfort. And five minutes later, she moves on as if nothing has changed. Because really… nothing has.

“Success consists of going from failure to failure without any loss of enthusiasm.” — Winston Churchill

4. Right now is all that really matters.

Most people are waiting for their big break.

And don’t get me wrong, all of those things are great goals!

But waiting is where there’s an issue.

What, after all, are they waiting for?

Well, it’s actually pretty simple. They — YOU — are waiting to be happy again.

You tell yourself, “Once I buy that house, make that money, get that job, and travel the world, then, FINALLY, I can be happy.”

Naturally, that stupid rule keeps you from ever being happy and ever enjoying the moment (which is all you have access to, anyways).

But you know who isn’t waiting to be happy?

She smiles when you kiss her — a big, authentic grin. She laughs when you tickle her (then she tries to tickle you back). And she plays constantly.

She’s not waiting for her big break and she’s not waiting for some final destination where she can finally eat ice-cream all day and watch an endless stream of cartoons (although I’m sure she WOULD love that) — she’s just enjoying the moment as it is.

Which is good… because this moment right now is the only real thing in the world.

And waiting to be happy at some far-off point in the future is just deciding to be miserable right now.

What are you capable of?

Answer that question, right now. Say a few things out loud that you think you’re pretty good at.

Good. Now what you are incapable of?

Do the same thing. Say a few things out loud that you currently believe you’re incapable of doing.

Well, it all comes down to your reference points. When I ask you those questions, the first thing your mind searches for is references of what you’ve done or failed to do in the past. If you’ve consistently failed to take off weight, then you probably believe you can’t lose weight. If you’ve consistently failed to wake up on time, then you probably believe you can’t wake up on time.

That isn’t true, of course.

It’s just that you’re stuck in a loop of associating your past actions with your current behaviors.

She is untainted by past references. And so she approaches everything in life with the curiosity and ingenuity of a fortune-500 CEO. She tries to get the key in the keyhole (even when she straight-up isn’t tall enough). She tries to run from me (even when there’s no chance of escaping). And she tries to chatter and speak consistently (even though she’s a little delayed in that regard).

The point is, since she doesn’t have past references telling her that she can’t, she believes anything is possible.

So… what would happen if you cultivated new reference points for yourself or finally let go of your disempowering beliefs?

How would that change what you think you’re capable of — and by association, what you actually are capable of?

Children have lots to teach us about getting our gusto back.

I believe that each of us is born with gusto, with an inner flame — a passion for learning, experiencing, growing, and thriving — but that we throw water on that flame as life and its disclaimers lay hold on us.

Fortunately, we can reclaim that gusto with just a little bit of intentionality.

Above are the five lessons I’ve learned so far from raising my daughter (I’m sure there will be more lessons to come).

But what about you?

What have you learned from your tiny human?

Let me know in the comments!

Mike is a writer for SUCCESS, AdWeek, and Addicted2Success. He’s been quoted on Forbes and Entrepreneur for his expertise in marketing and personal development. He’s also the owner of Get Your Gusto Back where he helps people reignite their inner fire.